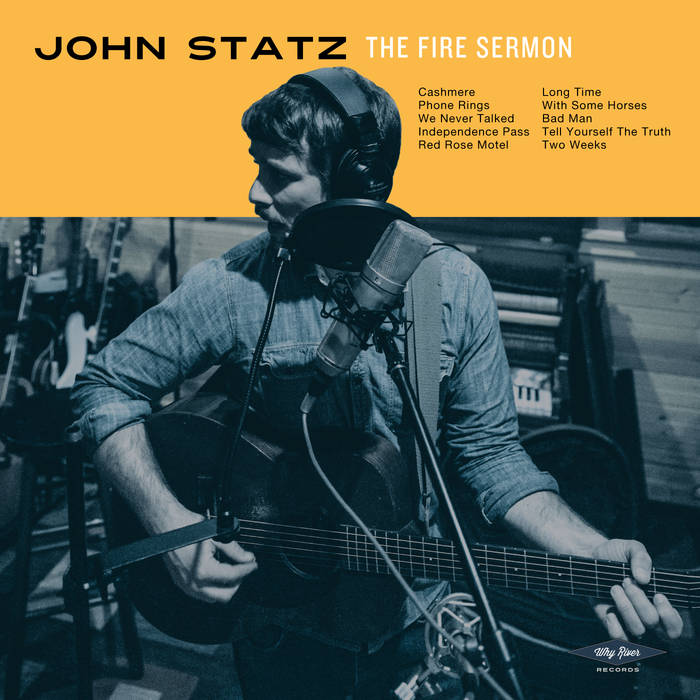 Santiago aldaco john stats love your music you are one of my favorite artists I can tell you how much I appreciate the music you make ,

John Statz has been writing love songs lately, specifically about the kinds of romantic love that burn. Namely, all of them. When we first enter a new relationship we are filled with burning desire. Sometimes we later take those same relationships for granted and seemingly burn right through them. At the end we might find ourselves literally burning old love notes, or bridges, which turns out to be an excellent time to listen to that fire in our bellies. Hit the road, see something new, spend time on ourselves. The Fire Sermon is more than a meditation on romance in the 21st century, it is an assertion gleaned from trial by fire.

One of the more prolific and hard-working young songwriters working in the Americana genre, John Statz has released seven studio albums, and performed all over North America (including Canada and Mexico) and Europe, all in just a shade over a decade. Throughout that time he's been writing the kind of songs that float through your mind and stay nestled in your thoughts long after listening (American Songwriter) and it's been said that his songwriting can stand beside the best and above the rest (No Depression). Along the way John has attracted the attention of the likes of Americana scene heroes Jeffrey Foucault and Bo Ramsey (Lucinda Williams, Greg Brown), who separately produced his last two records. This latest is produced by fellow Denver songwriter Megan Burtt, whose instincts and backing band help bring forth an entirely new sound from Statz. The title of The Fire Sermon was taken from the third section of T.S. Eliot's poem, The Wasteland, the name of which was borrowed from a sermon given by Buddha, in which he denounced the fires of passion, hatred, and infatuation with which the senses burn, according to Eliot's endnotes. At the very end of the Fire Sermon section Eliot simply repeats, “Burning burning burning burning.”

John Statz was given a guitar by his grandmother when he was 15, which turned out to be perfectly timed for a teenager who, after ten years of piano lessons, had lost interest in classical music and had taken to learning John Lennon and Elton John tunes, first trying out his singing voice and turning towards rock and roll. Spending the rest of his high school years in southern Wisconsin attempting to play and sing like Neil Young and Cat Stevens, it wasn't until Statz was 19 and attending university in Oshkosh that he began writing songs. The spark lit after attending a show at the storied Cafe Carpe in Fort Atkinson, Wisconsin featuring Jeffrey Foucault and Peter Mulvey, who quickly became heroes, and, much later on, fast friends and colleagues. The first record, Dusk Came Slow, was engineered by a friend enrolled in the university recording program, and what followed for John has been 11 years of touring everywhere from Bellingham to Budapest, Fairbanks to Mexico City, all the while becoming a stronger songwriter, and a more compelling performer.

Photo by Nikki A. Rae
Design by Jeremiah Nelson