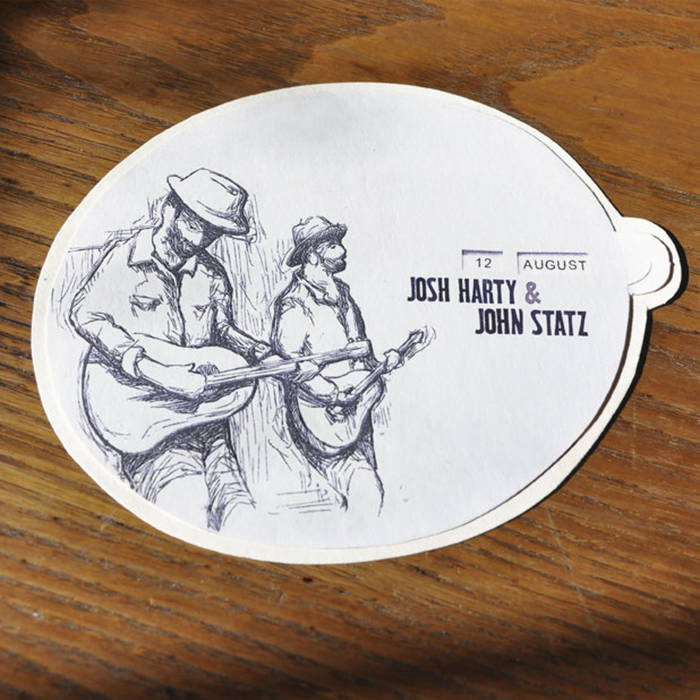 Indie folk troubadours Josh Harty and John Statz have teamed up to produce “12 August” (Money Wolf Music, February 18th, 2014). A full-length album of originals and covers, “12 August” is a minimally produced, yet richly textured display of their guitar prowess and innate feel for music. The ease with which they converse musically on the recording is a testament to the years each has spent on the road polishing his craft, and also to their long-standing friendship and mutual respect.

Both artists are well-known in the folk, folk rock, and alt-country genres for their solo work and extensive touring. The Atlanta Music Guide describes Josh Harty as, "An honest voice and fingers that seem to catch fire," and No Depression says of him, “There is a dignity to this music making that leaves us feeling enriched for the experience.” Milwaukee’s Shepherd Express describes John Statz’s debut album “Ghost Towns” as "...a hard-chugging roots-rock record in the tradition of Neil Young and Tom Petty..." and Denver’s Westword calls it a “full-length dripping with folk-rock immediacy and the kind of grit that cooled heels never gather.”

While having shared the stage a number of times, “12 August” marks the first time Harty and Statz have appeared together on a recording. When they realized they would both be in Denver, CO, on the same day with no shows scheduled, they decided to meet in a studio and record, just for the fun of playing music together. Sitting face-to-face, just a few feet between them, they chose the songs, mapped out the changes, and then played them straight from the heart.

Recorded live at Silo Sounds on the south side of Denver, “12 August” is presented without overdubs or edits. Throughout the album, Statz and Harty share the center stage with a blend of vocal harmony and guitar interplay that highlights this intimate showcase of original songs and covers. While they entered the studio with nothing more than the expectation of capturing a snapshot of the day, they walked away with a testament to the power of their voices, musicianship and camaraderie. When asked about their approach to the recording, Statz replied “It’s just plain fun to sit three feet apart, facing a good buddy, feeling out some tracks on a tightrope.” It’s an approach the two men obviously relish, as they’ll be sharing the stage on numerous dates throughout the year to celebrate the album’s release.