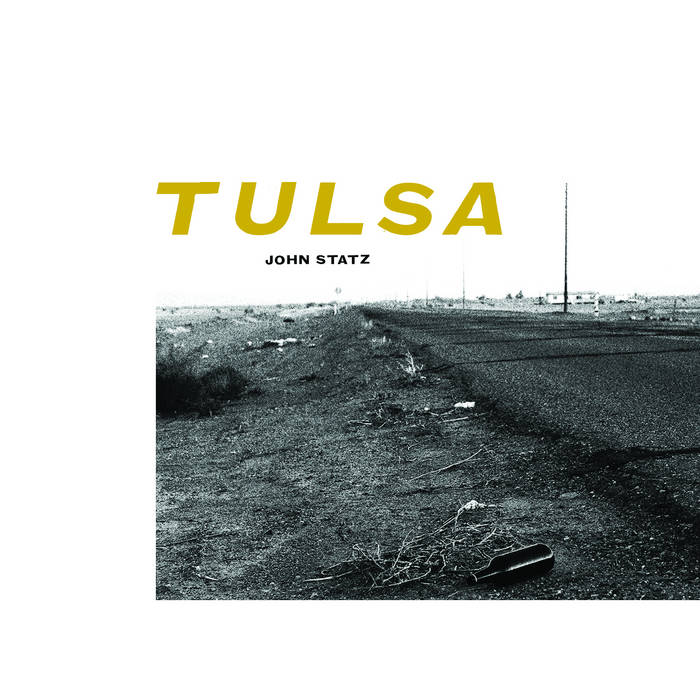 PAUL KEMP love this disc ! had not heard of john until kris delmhorst played a house concert for me here in high Wycombe, u/k. Favorite track: Queen Of The Plains.

John Statz recorded his new album with an all-star band in the middle of a Vermont ice storm. “We had to keep the stove burning the whole day, and then the electricity went out for ten minutes,” concedes Statz. “Luckily, we were just rehearsing.” John Statz will release Tulsa on March 10, 2015.

After years of DIY touring everywhere from Eastern Europe to Mexico, the Wisconsinite who now resides in Colorado fell in with fellow Midwesterner Jeffrey Foucault, a critically acclaimed songwriter and veteran of the americana circuit. A fan of Statz’s last album (2012’s Old Fashioned, produced by Bo Ramsey), Foucault offered to produce his next record while the two were on tour together in Colorado.

The resulting Tulsa is beautiful blend of soft americana and smooth folk with echoes of The Jayhawks and Whiskeytown. “John writes songs you can’t shake,” says Foucault. “They follow you around all day and run through your head at 3 a.m. Open hearted, horizon-line songs.”

“Jeff kicked my ass. He pushed me to crank out well-written songs,” continues Statz. “He’s such a great songwriter himself and I felt like I had to step up my game. And then there is the absolutely amazing band…” The band John speaks of features Billy Conway (Morphine) on drums, Mark Spencer (Son Volt) on electric guitars and pedal steel, Jeremy Moses Curtis (Booker T) on bass, Jeffrey Foucault on guitars and vocals, Caitlin Canty singing harmonies and Matt Lorenz on fiddle.

“Tulsa feels like how I was always supposed to make a record. Hunkered down for three days, living and eating with the band, tracking live, all during the raging ‘Polar Vortex’.”

One of the more prolific and hard-working young songwriters working in the Americana genre, John Statz has released seven studio albums, and performed all over North America (including Canada and Mexico) and Europe, all in just a shade over a decade. Throughout that time he's been writing "the kind of songs that float through your mind and stay nestled in your thoughts" (American Songwriter). ... more

Track Name: Tulsa
Head out west to Arizona,
looking for a place to cool my heels.
My truck, it broke down out of Tulsa,
and I've been stuck in Oklahoma still.

Working at the Cherokee casino,
watching people pull those slot machines.
Spending all those precious hours,
spending money like it's free.

Working late into the morning,
sleeping through the afternoons.
And I still dream of Arizona,
but I guess Tulsa has to do.
Track Name: Old Pro
Middle-aged, last time on the field,
it's been a good career.
I got this girlfriend, she's been good to me,
maybe now things quiet, and we can move on in.

They told me not to spend my money quickly,
and that I shouldn't drink too much.
They told me I should look into some savings,
and not to get too far out of touch.

Well age came quick, yeah it snuck on me.
And that second kid we had made it hard to breathe.
I still see the old guys now and then,
Ray's divorced, Max got cancer, and Willie still gets lit.

They told me there'd be press jobs waiting after,
and that I should keep myself in shape.
My wife told me that she was sick of losing,
and half of nothing was all hers to take.

54 now and it doesn't really seem that old...
Track Name: Home At Last
Midway to Denver, over the plains,
don't wait up I'll be home late.
Left Milwaukee this morning at 9,
saw your face in every line.

Juneau to Anchorage, over the state,
missed your call and now it's late.
Left my hotel room this morning at 6,
early mornings it's you I miss.

One last gig then fly home fast,
Kentucky bourbon in a glass,
trim my neckline, trim my 'stache,
coming home, home at last.

Lincoln to Denver, crossing the plains,
Don't make plans, I won't delay.
Just east of York at quarter past 9,
see your face on every sign.

Past Grand Island, driving fast,
cup of coffee, Ramblin' Jack.
Mirror reflections on the dash,
coming home, home at last.
Track Name: Exposure
Cracked windows in the rented duplex,
the door's busted and the screens all bent,
down on Willy Street the evening's spent,
at the Crystal Corner Bar, or in Terri's bed.

Sixteen degrees and it's snowing again,
flakes falling and the faces red,
bar time's coming at the evening's end,
and the cheap beer neon signs are growing dim.

Most other nights someone had caught her,
she had a future, she had two daughters.
She'd been working on keeping sober,
but what's the difference now that it's over.

Tuesday morning when they found her there,
in the snow bank with a frozen stare.
She'd tumbled in to night's frigid air,
and exposure in December kills without a care.

Most other nights someone had caught her,
she had a future, she had two daughters.
She'd been working on keeping sober,
but what's the difference now that it's over.
Track Name: Any Town Will Do
If you're rolling out west with your game face on,
rolling out cigarettes, crying on the phone,
it won't take much to make you feel gone,
for a night or two, any town will do.

Phoenix to Santa Fe with the radio on,
feels like living in a Neil Young song.
But you won't feel right 'til you get yourself wrong.
For a night or two, any town will do.

High desert passes, gas station sunglasses.
Your heart like a sunset, wild and free,
and there was always something you were meant to be,
for a night or two, any town will do.

And your life is just a movie in the bar back mirror,
everyone's a stranger, nothing is clear,
you could make it alright anywhere but here,
for a night or two any town will do.
Track Name: Amsterdam In Autumn
60's soul tunes on the system,
murky air hangs, ambition missin'.
How you gonna spend your money?
How you gonna watch it go?
Amsterdam in Autumn, Vermeer and Vince Van Gogh.

Handsome ladies wait in red,
some men visit and hang their heads,
walking in Die Wallen, walking home at dusk.
Amsterdam in Autumn, and tourists full of lust.

But they pushed back out of town,
we dug trenches in hard ground.
Against machine guns we had nothing, nothing.
How many men fell down?
How many men fell down?
Down.
Track Name: Queen Of The Plains
Denver smells like a campfire again,
the rain days, it's been awhile.
Downtown the buildings they echo the wind,
and the Front Range it goes on for miles.

The kids in Wash Park play in the streets,
the cats creeping down into gutters.
The homeless look into the windows for free,
and the drunk men just laugh at each other.

Barely now seen, the cross on the mountain,
the smoke thickly billowing north.
Cheesman Park trees and depressed empty fountains,
and the dive bars are staying the course.

Over at Hick's house the lights on all night,
in the park men sleep on cement.
Across town in Globeville the hipster kids fight,
over whether a hat was well-meant.

Top of Republic, the city still dwarfed,
by the great American west.
Out to the mines where lives ended short,
and the desperate were put to the test.

Playing for a losing team down in Tennessee,
he met Tom Keane.
Tom was a great shortstop, Jim knew when their eyes locked,
he'd stand to lose a lot.

Back in those older times it wasn't heard of,
or maybe it was just whispered behind closed doors.
A man who loved another was a disturbed one,
in those double A days in Tennessee.

At Chapman Highway Park Tom Keane left his mark,
got called up to start.
Up North in Chicago, Jim was sad to see him go,
thought he'd try to follow.

Jim quit the minor leagues, they both left Tennessee,
traveled separately.
They got to Comiskey in the big city,
things were looking sweet.

Back in those older times it wasn't heard of,
or maybe it was just whispered behind closed doors.
A man who loved another was a disturbed one,
in those south side days in Beverly.

One night at the corner bar Jim and Tom met Billy Carr,
he was a local star.
They left at one o'clock, Billy followed them four blocks,
he fired all six shots.

Back in those older times it wasn't heard of,
or maybe it was just whispered behind closed doors,
the men had played the game and met its end determined,
dreaming of those summer days in Tennessee.
Track Name: Roadkill Zone
Trying to ignore the dead snake,
tangled up like rope on the shoulder.
Trying also to ignore the bouquet,
dangling off one nail on the stop sign,
that was dedicated to a young girl,
who died on the scene a month or two ago,
a roadkill zone.

Flowers made of plastic,
temples in the dirt.
Frozen with compassion,
sung from mourning birds.
And the fog will disappear,
and the trucks will travel on,
a roadkill zone.
A roadkill zone.
Track Name: One Way Opens
I was down in Van Nuys when they told me you didn't rise.
They said that you were only in disguise.
That this step was just the first, for the knowledge you will thirst.
After passing the door it couldn't be any worse.

But it only one-way opens, you can't go back.
It might just be the darkness, you'll find out fast.

I was outside Marquette when I had my brush with death,
truck was coming, brakes screaming, I swerved left.

It only one-way opens, you can't go back.
It might just be the darkness, you'll find out fast.
But the road is all that matters, anyway.
And we'll hope that it was crooked and you strayed.

I was dreaming you were breathing, I was sleeping in Talkeetna.
And the worst part is your life was just a drag.
So raise up your glasses to life lived while it lasted.
I hope you traveled well and saw splendid things.